by Isabella Furfaro – Photo of the award ceremony by Amos Nachoum

January 27, 2017, between the halls of the Boat Show & Watersports Exhibition in Düsseldorf (BOOT) ended the sixth edition of the World Shoot Out (WSO), the international underwater photography competition designed by the well-known Israeli photographer David Pilosof.
As in previous years, great emphasis has been given to the ending ceremony hosted by the BOOT.
Prizes were awarded to the winners of all eight categories as part of the contest that welcomed the participation of both professional and beginner photographers, 328 participants from 37 different nationalities.

Steven Kovac from the United States won the prestigious category of “Best five” thanks to his very special shots. He won a fantastic trip to Papua New Guinea. In the top ten of the best five category was also included the Italian shoot of Giacomo Marchione.
But this edition of the WSO will surely be remembered for the number of Italian photographers in the top positions in some categories.

It was the beautiful interpretation of the wreck as captured by Gianni Pecchiar to fascinate the international jury. Pecchiar got the first place in the category “Best Wrecks – Black & White”. A wonderful “play of light” created by Pecchiar outside of the wreck, lying in the sea, off the Croatian coast. “… The stern of the wreck ..” refers Pecchiar “is never fully illuminated by the sun …. The twilight gave me the idea of creating an interest in the shadows and focusing on the dark…”, he full-centered, we may assert, the theme of that category: the image should introduce the photographer’s perception of the wreck within its natural surroundings such as featuring elements, which represent the interaction of the wreck with its new underwater environment.

The first prize in the category “Amateur” was awarded to the spectacular sea horse shoot taken by Virginia Salzedo, framed between gills of a spirograph. The shot was also awarded the prize “Andromeda” as best picture of the year, a prize offered by the Administration of the Boot. “I experienced a very strong emotion …” says Virginia “… everything that happened to me was really unexpected. With my greatest pleasure my photo was awarded the first prize in the category Amateur, but I never could have imagined that it could win the Best Picture of the Year, because among the competitors there were other nine pictures taken by some of the most famous photographers in the world who have reflex cameras, more sophisticated than my compact camera”.

There are also three Italian teams that have reached the final stage of the selection of the “Global Underwater Photography Championship Category”.
Among the five finalist teams, each one consisting of three photographers from the same country, three of them were actually Italian. The six portfolio images presented by the USA team featuring Jeff Milisen, Renee Capozzola and Ron Watkins won the competition. The vote from the jury of the final stage of the Global Underwater Photography Championship category was carried out live during the evening of January 27. The jury was composed by the Swiss Kurt Amsler, the Italian Alberto Muro Pelliconi, the German Naemi Reymann and the Israeli Roni Sofer.
The Italian teams were composed of: team 1: Massimo Giorgetta, Giacomo Marchione, Stefano Scortegagna; team 2: Filippo Borghi, Adriano Morettin, Domenico Tripodi; team 3: Pietro Cremone, Marcello Di Francesco and Pietro Formis.
The prize for the best Macro went to the talented German photographer Tobias Friedrich and his captivating click of a frogfish taken in the Lembeh Strait using a special panel to achieve the desired effects and, as to Italians, the second place in the same category of Stephen Scortegagna is worthy of attention.
The prize for the best Wide angle picture was awarded to the fascinating picture of the Spaniard Eduardo Acevedo.
The winners of the “Sharks” category were the three spectacular shots made by the Swedish Anders Nyberg.

The award in the category “Video clips” went to the wery beautiful video of the American Evan Sherman “The Not so Silent World”. Congratulations to the winners, the many competitors and to David Pilosof for this great and renewed success!

THE WSO PRIZES
By David Pilosof

“Greetings by David Pilosof from Boot Dusseldorf where the World Shootout Underwater Grand Prix winners where have been announced winners in all 8 categories.

Steven Kovac from USA won the prestigious Best 5 Images category, with prizes including a dream dive vacation for 2 (worth $20,000) in Papua New Guinea, including 7 nights at the Tawali Resort, 7 nights at Tufi Resort,10 nights on board MV FeBrina + PNG domestic flights.
Gianni Pecchiar of Italy won our Shipwrecks category, receiving a 6 days Red Sea on-board safari aboard the M/Y South Moon for 2 persons, courtesy of Sea Queen Fleet.
Virginia Salzedo, Italy won $1,500 USD check courtesy of Unterwasser magazine in the Amateurs category. A breakthrough photograph of the year, the same image also awarded the prestigious “Andromeda” the “Boot Dusseldorf Directors’ Prize” awarded for the best picture of the year.
The Macro prize went to Tobias Friedrich of Germany, who won a $1,500 prize, courtesy of Olympus.
The Wide Angle prize went to Eduardo Acevedo of Spain, who won a 7 nights, 5 diving days package for 2 at the Oasis Dive Resort in Marsa Alam, courtesy of Sinai Divers.
Winner of the Sharks category, Anders Nyberg of Sweden , won a dream sharks dive vacation for 2 people, worth $7000 offered by Avalon Cuban Diving Centers at Gardens of the Queen.
The Underwater Photography Global Championship prize went to the USA Team who won: $ 6,000 worth of SEACAM products + $ 10,000 dive trip to Papua New Guinea at Walindi Plantation Resort and Lissenung Island.
The Video clip prize went to Evan Sherman from USA, who won a $1,000 cash prize, courtesy of the Israeli Diving Authority.
Congratulations to all our champions and thank you to our generous sponsors.
Dusseldorf, 28/01/2017
http://www.worldshootout.org“ 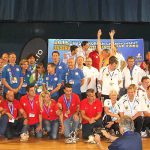 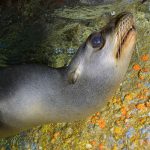 Next article - The sea lion and the fin swimming »