The sounds of the sea

“Le click” told me the French photographer who I accompanied that time in the stunning backdrops of the island of Coco, in Costa Rica.
Still, motionless, on a seabed about 40 meters deep, positioned as on a balcony of a theater waiting for the beginning of the show, we waited the passage of the majestic hammerhead sharks that dozens were approaching the site where the strong current advised to stand still, belly to the ground, “anchored” to bottom of the sea near the cliff.
All of us were hoping they would get closer to us, in the few minutes that air and depth allowed us to stay.
I sometimes peered behind me the movement of white tip sharks that were standing placidly in the same area where our group of divers was.
When the hammerhead sharks approached with a few strokes of the fin, we remained silent holding our breath for a few moments, so that the sound of the bubbles emitted by our regulators would not move away those fascinating specimens.
A beautiful hammer finally came towards us!
My heart started beating slightly accelerated, perhaps for the emotion, perhaps for the tension.
I saw my photographer become a feline predator, ready to catch the prey … with his camera!
In a few seconds the hammer came up to him and they faced one another as in a duel. The faint sound of the click of the camera was barely audible … and a moment later the shark had already vanished. He did not give the photographer a second chance, there had not been a second click.
But what had the shark perceived? Our movement? The sound of the camera?

“Our” wonderful hammer had not been attracted (someone would thinks “fortunately!”) by us and our sounds. Yet more curious sharks are drawn to the fishermen who, in some parts of the world – particularly in the Pacific and Indian Ocean areas – emit sounds through the use of traditional tools: sticks, rattles, stones, shells that snap the one against the other, to simulate, for example, the passage of a wounded fish, potential prey for sharks.
We were not able to draw enough his attention despite the shark had been able to perceive the movement of water molecules that our bodies had caused!
But what happens in the marine world where the sounds are received attenuated by human ear and without distinguishing the origin?
What lies beyond the apparent silence of a dive in apnea or the sound of the bubbles from the regulators related to cylinders tanks that accompany the divers on a dive?
The underwater world is full of acoustic informations that we hardly manage to capture and decipher.
How can we forget the ancient tradition of some Malaysian fishermen, the ‘fish listeners’ that diving in apnea manage to locate schools of fish just listening to “their voices” and show to other fishermen the richest place for fishing?
The fish, which for thousands of years have been living in the deep sea, have particularly developed sense of hearing.
In the various processes of adaptation, some species have acquired the ability to emit sounds through body parts (bladder, bones, fins) that create special “songs”.
For sharks the main organ is the hearing that works with an inner ear that contains nerve cells that react to sound vibrations. Thank’s to it sharks can reach the sound source even when it’s far.

Some cetaceans, such as dolphins, employ sonar that produces a sound that starts with the emission of distinct clicks. Dolphins can change the intensity of clicks even up to 220 decibels (the loud music can reach 120 decibels) and perceive far away objects from even in the dark.
In their communication system, according to numerous studies, the dolphins would vary a sound generator according to the different circumstances: courtship, protection of puppies, defense.
Even sperm whales use echolocation clicks – also called biosonar – that is the ability to orient oneself, to identify obstacles, preys and others through the emission of ultrasound and listening to the echoes reflected by objects and by environment.
In this way, according to several studies, the sperm whales communicate with each other by producing a series of clicks, called “coda” (queue).
In reality each individual emits its own “coda” feature, useful to the individual recognition.
But sounds are also used to stun prey: some species, such as herrings, have developed the ability to evade capture managing to identify the sounds of danger.
This leads us to remember the Sirens with their songs trying to “stun” Ulysses on his journey. The real or alleged sounds of the sea have given inspiration to religions and mythologies with the birth of beliefs, superstitions. The singing of whales, for many marine populations, has always been something sacred, a fighting chance against the evils from which they were afflicted.
But what can we learn from the inhabitants of the marine world?
Perhaps we could simply think that we can regain that feeling that we had when we were immersed in the amniotic fluid, and when, after our birth, we relied totally on our “sensitivity” that made up for the lack of vision during the first days of life?
Another reflection leads me to Beethoven: which listening mode he used when he composed his symphonies?
Probably those sounds so incredibly harmonious where the result of an “inner picture”, a totally “internal” ear.
A prodigy similar to thousand and mysterious “sounds of the sea”.

from the Magazine Musica News, Italy 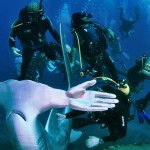 - Previous article « Silence of the sharks

Next article - Amazing Weekend at the Dive-a-Thon for HSA-SA: Scuba Diving, Citizen Science and more »