Silence of the sharks

Eilat, December 18th, 2016. 87 divers speaking up in the name of 70 million sharks on the first SILENCE OF THE SHARKS protest dive in Eilat, Israel.

Silence of the Sharks project

This morning, sharks of the world were provided with a voice. 87 dedicated diversholding protest posters and escorted by a 2-meter high shark statue, carried out the opening dive of the SILENCE OF THE SHARKS campaign at the Satil wreck inEilat, Israel.
SILENCE OF THE SHARKS is a global underwater campaign against shark hunting, initiated byproducer David Pilosof in cooperation with shark conservation organizations worldwide. The campaign is composed of a series of mass dives held in many different countries around the world. Each dive is an underwater protest hosting tens or hundreds of divers equipped with waterproof banners and speaking up in the name of sharks. These dives are documented professionally and covered by local and international media in attempt of raising public consciousness, which will eventually and hopefully translate into action.
The official opening dive of the campaign was successfully carried out this morning in Eilat. Since 87 divers participated at the dive, the logistical operation was quite complicated and challenging. NirAvni, one of leading professionals in the Israeli diving industry, directed the dive and had it all well planned ahead.Divers were divided into groups of 10 and each group was led by an experienced diving instructor. A detailed briefing was followed by a live dry rehearsal, ensuring that each diver is familiar with his or her role underwater. A festive ceremony was then held, announcing the official opening of the campaign, after which divers began to gear up and head out into the water.

During the ceremony, a 2-meter high statue of the project’s logo, created by artist Shlomo Cohen and printed in 3D technology, was introduced on stage.As soon as the ceremony concluded, a group of divers lifted the shark and carried it into the water. During the dive, the begging-shark statue served as the anchor of all divers.
Once divers have descended and made it to the wreck, they lined up and stretched their posters out in a form of an impressive demonstration. Once they received the sign agreed upon ahead, they flipped their posters into single letters, together composing the slogan NO SOUP FOR YOU.
Leading the SILENCE OF THE SHARKS project is our greatest motivation in life, our children. And so, the protest posters divers were holding during the dive were drawn and created by gifted students from Eilat, Israel and Cologne, Germany. Some of these posters can easily bring one to tears.

And so, the first SILENCE OF THE SHARKS dive has concluded. Similar underwater protests will follow in many countries during the following year, providing sharks with the loudest voice throughout the most silent protest.

Israeli delegations have begun carrying out protest dives in exotic dive sites, such as Cuba and Cocos Islands. Additional dives have already been announced by other countries. For instance, the Sardine Run in South Africa will be hosting divers speaking up in the name of sharks just as they have their best feast in the background. Please consider this as an official invitation to join the dive on June 4th, 2016.
Further information, images and videos about all of these dives is available at the SILENCE OF THE SHARKS Facebook fans page and soon on the official website – silenceofthesharks.org.
The final “D-Dive” and the largest underwater protest will be held in October 2016, hosting more than 500 divers from all over the world at the Mediterranean Sea and will be live broadcasted using an innovative, sophisticated and challenging technological operation.
“From the dawn of history the human kind has shared both fear and respect to sharks”, says Pilosof. “These predators inspired many authors and directors, who based numerous creations on their powerful image. Who dared to imagine that in such a short time, these impressive animals will completely extinct.Shark hunting is brutal and its consequences on the underwater environment are severe. Approximately 70 million sharks are hunted every year just for the sake of selling their fins to restaurants in East Asia. In many of these cases, once the fin is cut off, the shark is thrownback to the sea alive and struggles for several weeks until it finally dies. This abuse must be detained at once. I hereby call out to all divers worldwide to join us on this campaign. Follow us on Facebook, join the organized SILENCE OF THE SHARKS campaign and initiate more dives on your own.”
“70 million sharks are hunted every year all over the world”, he summarizes. “They cannot speak. But we can. And now, we finally are.”
For further information and campaign registration, visit the SILENCE OF THE SHARKS page on Facebook and soon the official project’s website – www.silenceofthesharks.org 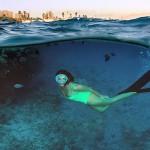 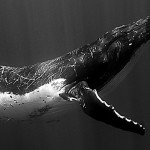 Next article - The sounds of the sea »