Waiting for the world to come out of the forced isolation due to the coronavirus pandemic, waiting for a revival of society, we take a short step back in time to the first days of February, when the Blue Dolphin Underwater Photography took place. Here is a short story.

In an almost unreal atmosphere and the dramatic moments that our country and the whole world has been experiencing, I find myself, for few minutes, immersed in the memory of one of the beautiful sporting moments experienced just before the worldwide lockdown: the Blue Dolphin Underwater Photography.

As in previous occasions, the Italian National team of underwater photography that represented the FIPSAS – the Italian Federation of Sport Fishing and Underwater Activities – has distinguished itself thanks to the excellent results obtained by the photographer Stefano Proakis and his model/assistant, Isabella Furfaro. In the wide angle category – one of the two specialties of the competition – they reached two first places. Two of the three photos presented had the same score on the top step of the podium. The first place in the “Macro” category was instead won by Jordanian Samer Bitar.

The contest consisted of the presentation by the 12 participating of three images relating to the wide angle and macro (close up) categories. Two competition days and four dives were scheduled in different sites. The athletes of Jordanian, Canadian, Egyptian, Lebanese, Palestinian, American and Italian nationalities competed in the splendid backdrops of Aqaba.

It is a warm and restorative sun that welcomes the Italian team upon arrival. The team is amicably accompanied and supported by Iwona, Antonietta and Giulio.

Arriving at the airport we feel a slight dizziness caused by a very early awakening due to the take-off from Rome in the early hours of the morning, but it becomes almost pleasant as it is a prelude to the discovery of a new country, to face a new adventure and a new underwater experience. The atmosphere we feel is different from that which we felt in Italy only a few hours before. The new context gives thoughts, about what would later become a health emergency that would soon hit the whole world, even the most distant places.

We are welcomed by Ayman Jabr, the manager who oversees the organization of the competition together with his staff.

As it often happens to underwater photographers traveling, we are faced with careful controls entering the country due to the complex underwater equipment, which – to inexperienced eyes – may seem unusual instruments as they inspire doubts and distrust. The first perplexities of the vigilantes change later into curiosity, and the initial concern of the equipment owner – at the sight of handling it – turns into a friendly dialogue between us and the vigilantes, a dialogue supported also by Mr. Ayman Jabr. He was immediately hospitable with each of us and will be the main contact person in Aqaba, our “Aladdin” who will answer our many questions.

The Captain hotel, located in the city center, hosts us and part of the athletes.

A few hundred meters from the Hotel is the nice diving center of Mohammad Qatawhneh, the Aqaba International Diving Center. Mohammad is one of the photographers participating in the competition and, with a collaborative spirit, he takes us together with Alain to the site of our first underwater excursion: the beautiful path of the Japanese Garden.

In the evening, the technical briefing takes place in the presence, among others, of the jury President and CMAS representative: the Lebanese athlete Annette Khoury and Simon Khoury, member of the CMAS Council. During the briefing, specific useful informations are provided regarding the competition while any further needs of the athletes are also discussed.

So we prepare ourselves for the next day which includes both the so-called “adaptation” dive and the first official meeting with the operational staff of the organization.

The organization related to the dives is carefully supervised by the Sinai Divers. The Sinai Divers are hosted inside the splendid premises of the Möwenpick Hotel, located south of the coast near the border with Saudi Arabia. We are warmly welcomed by Rajai Joury in a well-equipped and comfortable structure located in front of the beach, a few steps from the sea. Rajai will also participate in the competition.

We start to dive, therefore, leaving from the beach of the hotel on the extensive and beautiful Kiwi reef, probably one of the competition site. A diving time of 50 minutes is established, during this time we have to make the best use of our 12-liter cylinders; we have to, for safety reasons, finish the dive with 50 atm of air in the tank, as well as finish diving close to the beach from which we started. Kiwi reef will welcome us twice during the race.

During the first day of the competition, the departure is scheduled from the Aqaba marina. Competitors, jury and assistants are hosted in the splendid Harmtan boat near the site where the Cedar Pride wreck lies. This wreck is a Lebanese cargo ship and as many wrecks it is full of living marine organisms. After a serious fire in 1982, the Cedar Pride was subsequently sunk to become one of the most beautiful underwater attractions against the backdrop of Aqaba.

Unfortunately, the first day of competition was the protagonist of one of the very rare adverse weather events that occur in this part of the Red Sea!

The moorings of the large boat and the delicate diving equipment are put at risk by the rough sea and so, the first day ends after the first dive for safety reasons. We return to the port with the hope of having good shots in the camera and with the wish shared by all that the weather will improve the following day!

Due to the persistence of bad weather conditions, the second day of competition takes place from the beach of the Sinai Divers. We first dive on Kiwi reef while the second dive takes place, at the choice of the competitors, on Kiwi reef or on the nearby site of Airplane C 130, the Hercules sunk to create a new habitat for underwater life. The plane is easily viewed thanks to its 16 meters of depth.

After the competition days, we await the results issued by the jury that is composed of: Ms. Annette Khoury (Lebanon) and Mr. Simon Khoury (Jordan) Mr. Mohammad Sergi (Lebanon), Mr. Ahmad Qatawneh (Jordan).

The projection of the images presented by the competitors takes place during the ceremony that concludes the event in the elegant halls of the Mövenpick Hotel – Aqaba (downtown) in the presence of the Jordanian authorities, including his Excellency Mr. Sharhabeel Madi.

It is the emotion that usually characterizes the moment of the showing, which coincides with the presentation of the final results and the announcement of the winners.

The italians Stefano Proakis and Isabella Furfaro are filled with enthusiasm and emotion after the proclamation of victory in one of the two specialties: even 2 of the 3 images presented, as we said, in the wide angle category reach the first position, while the first place in the macro category was taken by Jordanian Samer Bitar.

Our congratulations go to all the participants who performed very well despite the adverse weather conditions.

The 3 images presented by the Italians in the macro category, even if not on the podium, receive great appreciation both from the jurors and from the people present in the room.

At the end of the event, Ayman invites the entire Italian team to participate in the 2nd edition of the competition, scheduled for the end of 2020.

We hope that this will be possible as it would mean that the world will be safe from the terrible virus Covid 19.
________

Jordan is a small state that takes its name from the river that crosses it, the Jordan, that ends its journey in the waters of the Dead Sea, a large salt lake located over 400 meters below sea level. In the Dead Sea the amount of water that evaporates is greater than that which flows into it and this determines, inside, the highest salt concentration in the world. The high salinity makes it easy for the bodies to float – and the people who try to swim are funny – and the development of life forms inside is very difficult. The salts that are extracted from it are used for therapeutic and cosmetic purposes.

The Jordanian territory is largely made up of deserts and plateaus.

The capital is Amman and the state is a constitutional monarchy. The current king is Abd Allāh II, husband of Rania of Jordan, passionate diver and promoter of some projects aimed at promoting underwater tourism.

The city of Aqaba represents the only port of access to the sea for Jordan within the gulf that bears the same name. In the evening you can admire the lights coming from the coasts of the nearby Israeli city of Eilat and, further south, those of the Egyptian coasts.

Aqaba is also a few hours’ drive from the ancient charming city of Petra and the beautiful desert location of Wadi Rum.

Aqaba can be also considered an ideal place to suggest to those wishing to undertake diving activities. Many dives start from the beach where the seabed gradually degrades and where, from the very first meters of depth, you can admire rocks rich in sponges and corals and fish with many different colors. The beauty of the seabed, the great biodiversity, the low presence of strong currents, the excellent visibility, the water temperature (never too cold) make many of the dives simple and pleasant.

The water is more salty than in the Mediterranean sea and, therefore, it is necessary to add a few kg on the belt in order to dive and reach a good balance. 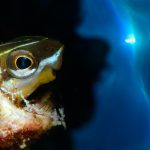 - Previous article « After the World Championship
Next article -